Our article “Uniqueness of the thermodynamic limit for driven disordered elastic interfaces” has been accepted for publication in JSTAT.

We study the finite size fluctuations at the depinning transition for a one-dimensional elastic interface of size $L$ displacing in a disordered medium of transverse size $M=kL^\zeta$ with periodic boundary conditions, where $\zeta$ is the depinning roughness exponent and $k$ is a finite aspect ratio parameter. We focus on the crossover from the infinitely narrow ($k\to 0$) to the infinitely wide ($k\to \infty$) medium. We find that at the thermodynamic limit both the value of the critical force and the precise behavior of the velocity-force characteristics are unique and $k$-independent. We also show that the finite size fluctuations of the critical force (bias and variance) as well as the global width of the interface cross over from a power-law to a logarithm as a function of $k$. 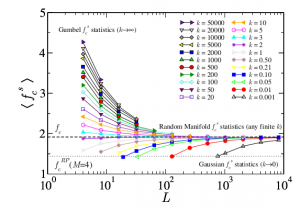 Uniqueness of the thermodynamic limit for driven disordered elastic interfaces
A B Kolton, S Bustingorry, E E Ferrero and A Rosso
Provisionally scheduled for November 2013