Our review accepted in Reviews of Modern Physics!

Has been accepted for publication in RMP.

Magnetic domain wall motion is at the heart of new magnetoelectronic technologies and hence the need for a deeper understanding of domain wall dynamics in magnetic systems. In this context, numerical simulations using simple models can capture the main ingredients responsible for the complex observed domain wall behavior. We present a scalar field model for the magnetization dynamics of quasi-two-dimensional systems with a perpendicular easy axis of magnetization which allows a direct comparison with typical experimental protocols, used in polar magneto-optical Kerr effect microscopy experiments. We show that the thermally activated creep and depinning regimes of domain wall motion can be reached and the effect of different quenched disorder implementations can be assessed with the model. In particular, we show that the depinning field increases with the mean grain size of a Voronoi tessellation model for the disorder.

The origin of the brittle-to-ductile transition, experimentally

observed in amorphous silica nanofibers as the sample size is reduced, is still debated. Here we investigate the issue by extensive molecular dynamics simulations at low and room temperatures for a broad range of sample sizes, with open and periodic boundary conditions. Our results show that small sample-size enhanced ductility is primarily due to diffuse damage accumulation, that for larger samples leads to brittle catastrophic failure. Surface effects such as boundary fluidization contribute to ductility at room temperature by promoting necking, but are not the main driver of the transition. Our results suggest that the experimentally observed size-induced ductility of silica nanofibers is a manifestation of finite-size criticality, as expected in general for quasi-brittle disordered networks.

A nice collaboration with Silvia Bonfanti, Alessandro Sellerio, Roberto Guerra and Stefano Zapperi at CC&B Milano.
A ‘Just-Accepted’ version of the manuscript can be found here.

Our new preprint on magnetic domain wall creep and depinning is available online!!! 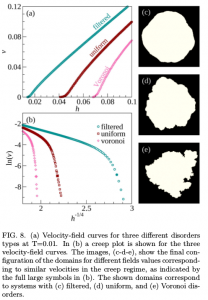 It has been a very long work, beautifully leaded by Alexandre the great, but finally it’s out there: the preprint of our review article on elastoplastic models for the deformation of amorphous solids. Since we begin a long edition path now, any comments and suggestions would be welcome! Enjoy! (arxiv:1708.09194)

In presence of impurities, ferromagnetic and ferroelectric domain walls slide only above a finite external field. Close to this depinning threshold, they proceed by large and abrupt jumps, called avalanches, while, at much smaller field, these interfaces creep by thermal activation. In this work we develop a novel numerical technique that captures the ultra-slow creep regime over huge time scales. We point out the existence of activated events that involve collective reorganizations similar to avalanches, but, at variance with them, display correlated spatio-temporal patterns that resemble the complex sequence of aftershocks observed after a large earthquake. Remarkably, we show that events assembly in independent clusters that display at large scales the same statistics as critical depinning avalanches. We foresee this correlated dynamics being experimentally accessible by magneto-optical imaging of ferromagnetic films.

Our article “Inertia and universality of avalanche statistics: The case of slowly deformed amorphous solids” accepted for publication in PRE.

In this paper, with Kamran Karimi and Jean-Louis Barrat, we solve numerically the dynamics of an amorphous solid under deformation in the quasistatic driving limit, by means of a finite elements technique. We study the noise statistics of the stress-strain signal in the steady state plastic flow, focusing on systems with low internal dissipation. We analyze the distributions of avalanche sizes and durations and the density of shear transformations when varying the damping strength. In contrast to avalanches in the overdamped case, dominated by the yielding point universal exponents, inertial avalanches are controlled by a non-universal damping dependent feedback mechanism; eventually turning negligible the role of correlations. Still, some general properties of avalanches persist and new scaling relations can be proposed.

It will be available soon in PRE.

Together with Laura Foini, Thierry Giamarchi, Alejandro B. Kolton and Alberto Rosso we studied the slow creep dynamics of elastic interfaces moving in disordered media.

In presence of impurities, ferromagnetic and ferroelectric domain walls slide only above a finite external field. Close to this depinning threshold, the wall proceeds by large and abrupt jumps, called avalanches, while, at much smaller field, it creeps by thermal activation. In this work we develop a novel numerical technique that captures the ultra-slow creep regime over huge time scales. We point out the existence of activated events that involve collective reorganizations similar to avalanches, but, at variance with them, display correlated spatio-temporal patterns that resemble the complex sequence of aftershocks observed after a large earthquake. Remarkably, we show that events assembly in independent clusters owning the same scale-free statistics as critical depinning avalanches. This correlated dynamics should be experimentally accessible by magneto-optical imaging of ferro- magnetic films.

The article (in preprint) can be find here on on the arXiv repository.

Our article “Driving rate dependence of avalanche statistics and shapes at the yielding transition” has been accepted for publication in PRL!

We study stress time series caused by plastic avalanches in athermally sheared disordered materials. Using particle-based simulations and a mesoscopic elasto-plastic model, we analyze size and shear-rate dependence of the stress-drop durations and size distributions together with their average temporal shape. We find critical exponents different from mean-field predictions, and a clear asymmetry for individual avalanches. We probe scaling relations for the rate dependency of the dynamics and we report a crossover towards mean-field results for strong driving.

You can find it here on arXiv, and here published in Physical Review Letters.

In this article we obtain, using semi-analytical transfer operator techniques, the Edwards thermodynamics of a one-dimensional model of blocks connected by harmonic springs and subjected to dry friction. The theory is able to reproduce the linear divergence of the correlation length as a function of energy density observed in direct numerical simulations of the model under tapping dynamics. We further characterize analytically this divergence using a Gaussian approximation for the distribution of mechanically stable configurations, and show that it is related to the existence of a peculiar infinite temperature critical point.

Update: It is now published in Physical Review Letters!